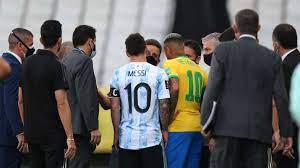 August 17 – The suspended World Cup qualifier between Brazil and Argentina has finally been cancelled officially after Brazil argued the risks were too great ahead of the finals in Qatar.

Even though it was a meaningless fixture, in May FIFA ruled the game would have to be replayed after rejecting appeals from both national federations.

The September 2021 clash in Sao Paolo had to be called off amid on-field chaos caused by pandemic rule breaches. In bizarre scenes, Brazilian health officials came on to the pitch minutes after kick-off to dispute the quarantine status of several Argentina players.

Both countries had already easily qualified for the World Cup finals as the top two teams in the 10-nation South American group.

The two great rivals took the case to the Court for Arbitration of Sport, which was expected to rule later this month but a deal with FIFA has now been reached to cancel the match which was due to take place on September 22 during the international programme.

Both federations confirmed in separate statements that the case has now been resolved, freeing them up to play other friendlies. Reports said both agreed to pay a fine, understood to be CHF150,000, with half the amount suspended for a two-year probationary period and half going directly to the World Health Organization.

“Finally, the match between Brazil-Argentina will not be replayed and the open date will allow for our national team to play a friendly as a result, in preparation for Qatar World Cup 2022,” the CBF said, without identifying a possible opponent.

“The CBF is grateful to FIFA for the willingness and availability to resolve this problem under these very specific circumstances in this short span of time.”

Algeria and Tunisia have been mooted as possible opponents for the Brazilians, while Argentina said it was also looking to play alternative friendlies.