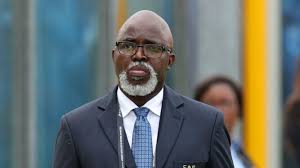 August 17 – The embattled president of the Nigeria Football Federation (NFF), Amaju Pinnick – one of the most colourful and controversial figures in African football – has announced he will not seek re-election for a third term in office.

In power at the NFF since 2014, Pinnick (pictured),  a strong ally of FIFA president Gianni Infantino, has hardly been a beacon of good governance having frequently been accused of corruption. His position recently came under further pressure after the Super Eagles failed to qualify for the World Cup in Qatar.

During an interview on Arise TV, Pinnick, a member of the all-powerful FIFA Council, publicly declared he would work with whoever emerges as president after him, though he insisted there have been calls from different quarters persuading him to continue in office.

“Third term, no, no. I am telling you that as there are so many Nigerians that are capable to run Nigerian football,” said Pinnick, the only person to have held the position for two terms, the second of which is due to expire on September 20.

“I will assist and work with whoever emerges as the new (NFF) President and that’s my promise. I’ll intervene but never interfere.”