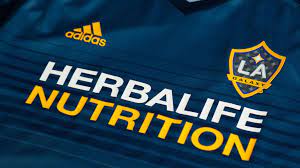 August 18 – LA Galaxy have agreed a “multi-year renewal” of their Herbalife Nutrition shirt sponsorship, the longest running main partner deal in the MLS.

Reports say the deal is a 5-year renewal at $7 million per season, starting with the 2023 campaign.

Herbalife has had a 17-year association with Galaxy, starting in 2005 as the club’s official nutrition partner, before taking the shirt sponsorship in 2007.

Herbalife Nutrition will continue its designation as the LA Galaxy’s nutrition partner, health and wellness partner, and the official nutrition lifestyle partner.

Additionally, Proactive Fueled by Herbalife Nutrition, an elite state-of-the-art performance facility, located in Westlake Village, CA, will be available to the team for preseason training and sports performance testing at the facility.

Herbalife’s logo will feature on Galaxy’s home and away shirts as well as training kits.

Chris Klein, president of LA Galaxy, said: “We are thrilled to extend our record-breaking jersey partnership, which is not only the longest in MLS but also one of the most successful in regards to community impact and the contributions made towards the advancement of soccer worldwide.”

As part of the sponsorship, the Los Angeles Galaxy Foundation and the Herbalife Nutrition Foundation are committing $1.25 million to support charitable efforts to benefit vulnerable and underserved children around the world.

“We are excited to extend our 17-year partnership with the LA Galaxy and expand it to include new areas of collaboration that will benefit our independent distributors, LA Galaxy players, fans and communities worldwide” said Frank Lamberti, regional president of the Americas for Herbalife Nutrition.