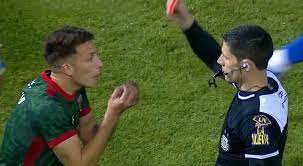 August 19 – Argentina’s justice system has opened an investigation into whether sports betting played a role in an Agropecuario player being sent off against Boca Juniors in a cup game this month.

Milton Leyendeker was red carded eight minutes into the match on August 10 for a challenge on Exequiel Zeballos. Boca won the game 1-0 but Zeballos suffered a serious ankle injury that required surgery.

“The prosecutor (Celsa Ramirez) is investigating if there were bets on whether there would be an Agropecuario player sent off before 10 minutes into the match,” the public prosecutor’s office of the City of Buenos Aires said on its Twitter account.

Local media first reported that gambling might have been involved. “We want to see if there is any truth in the media reports,” a source from the prosecutor’s office told Reuters

Leyendeker said the idea that he deliberately got himself sent off was “totally crazy”.

“Am I going to leave my team with one less, playing against Boca, in a game that everyone wants to play?” he was quoted as saying by local media publication Infobae. “Something like this had never happened to me.”