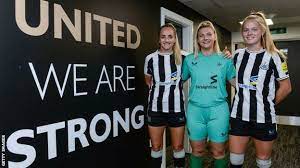 August 22 – Newcastle United have completed a restructuring to complete official ownership of the club’s women’s team, the Saudi-owned Tyneside outfit announced this weekend.

Supported by the Newcastle United Foundation, the women’s team previously operated independently from the men’s club. The women’s side will now benefit from more formal support across the club.

Calling the integration a “huge step up”, coach Beck Langley said: “We’ll also have an emerging talent system that will create a legacy in the North East, giving girls in the region a well-defined pathway, with the chance to enjoy playing first and foremost, as well as an opportunity to develop within the club.”

In a statement, the club’s shareholders said: “From the outset, we have stated and demonstrated our wholehearted commitment to the growth of Newcastle United Women.

“The recent success of the Lionesses has added tremendous momentum behind women’s participation in football everywhere, and we want to create a pathway for all women and girls to be able to enjoy playing the game.

“Straightline NE Ltd are passionate about the region. They want to see Newcastle United Women going from strength to strength, and having them on board will support this important phase of our journey at a very exciting time for women’s football.”

This weekend Newcastle United Women kicked off the new season with a 4-1 away win against Merseyrail in the Premier League Division One, the fourth tier of English women’s football.

The restructuring comes against the backdrop of Newcastle United’s Saudi ownership. Last year the Kingdom’s Public Investment Fund acquired a majority stake in the club.