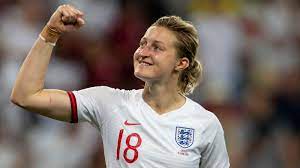 White scored 52 goals in 113 appearances for her country and retires on a high after helping the Lionesses make history by winning the European Championship for the first time.

When England beat Germany in extra time at Wembley last month, she broke down in tears.

“This has been one of the hardest decisions of my life but one that I know is right for me,” said the Manchester City forward.

“This decision has always been one I have wanted to make on my terms. And this is my time to say goodbye to football and watch the next generation shine.”

White did not have her best tournament at Euro 2022 in terms of goals but England manager Sarina Wiegman described her as the “perfect team player”.

“Ellen has given so much for England and we are all so proud of her,” Wiegman said.

“I have only had the pleasure of working with her for this past year, but her professionalism, work rate and finishing ability are world-class!

“This summer, she did an amazing job for the team, she is the perfect team player and helped the younger players to find their way in international football.

“I already knew she was a great player but I found an even better person. We will miss her, but I fully understand her decision to take a new direction.”

White’s retirement was followed by that of midfielder Jill Scott, 35, the second most capped player – male or female – in English football history after a 16‑year international career.