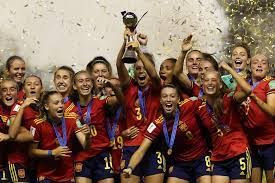 August 30 – Spain defeated Japan 3-1 to win the U-20 Women’s World Cup with Salma Paralluelo’s brace powering the Europeans to the title.

Four years ago, the Japanese overcame the Spanish with the same scoreline to win their maiden world crown, but on Sunday roles were reversed as a dominant Spain deservedly won the final of the junior competition at a packed national stadium in San José, Costa Rica.

Spain took a commanding advantage inside the first 27 minutes through goals from Inma Gabarro, her eighth goal of the tournament, and Paralluelo. The Japanese rallied after the break with a strike from Suzu Amano, but could not make further inroads.

In the bronze medal match, Brazil breezed past the Netherlands 4-1 to emulate their best result ever achieved at the 2006 U-20 Women’s World Cup.

FIFA technical director Arsene Wenger and FIFA advisor Carlos Cordeiro, formerly of US Soccer, are among those who have joined Infantino on the trip.

At a news conference in Costa Rica, the FIFA supremo looked forward to World Cup later this year, saying that the tournament in Qatar will be “as if a child goes to Disneyland for the first time.”