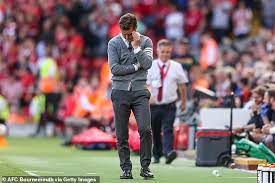 August 31 – What price gaining promotion? Scott Parker has been sacked by Bournemouth just four games into the 2022/23 season – the earliest in the Premier League for a generation.

Parker was dismissed just 25 days into the season after newly promoted Bournemouth were humiliated 9-0 by Liverpool last weekend.

Bournemouth have more points than Wolves and Leicester but the owners ludicrously saw fit to wield the axe after just four games.

The Cherries had an unenviable run of early fixtures against top teams, losing to Arsenal and Manchester City as well as Liverpool but opened their campaign with a win over Aston Villa.

“Our promotion back to the Premier League last season under his tenure will always be remembered as one of the most successful seasons in our history,” said Demin.

“However, in order for us to keep progressing as a team and a club as a whole, it is unconditional that we are aligned in our strategy to run the club sustainably.

“We must also show belief in and respect for one another. That is the approach that has brought this club so much success in recent history, and one that we will not veer from now. Our search for a new head coach will begin immediately.”

Demin was almost certainly referring to Parker’s honest assessment after the Liverpool game when he highlighted his squad being “under equipped” for the top flight in terms of new signings.

Parker said he was “not surprised” at the Liverpool result saying it “proved too big a challenge. The levels were far too big. We’ve got a decision to make as a club. There will be days like this. Time will tell.”

Liverpool manager Juergen Klopp were among those who leapt to Parker’s defence.

“When I heard the news, I realised how important it is in this moment to have the right owners at the club,” Klopp said.

“The three teams that have come up (from the second-tier Championship)… Nottingham Forest are spending, Fulham are and I can’t remember Bournemouth doing a lot, which is difficult for a coach. I felt for Scott.”