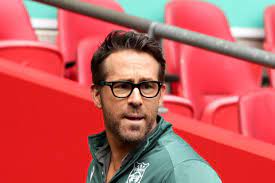 August 31 – Hollywood star and Wrexham co-owner Ryan Reynolds has weighed into the broadcast debate over the National League, and has found the support of the English Tier 5 league’s title sponsor Vanarama.

Reynolds called for National League fixtures to be live streamed nationally and internationally, tweeting last week: “After months of maximum effort, the decision (thorugh inaction of the @Vanarama National League) to not allow domestic/international streaming of matches of Wrexham and the other clubs in the league is truly baffling.”

A documentary series. ‘Welcome to Wrexham’, begins airing this week featuring the club, the takeover by Reynolds and Rob McElhenney, and last season’s National League campaign.

The series will be aired worldwide, trading on the Hollywood stars’ celebrity, but will also bring significant profile to Wrexham and the National League, and the club’s battle to get promoted back to the English Football League’s divisions.

Anyone interested in checking out a game will draw a blank as the league is broadcast live in the UK by pay channel BT Sport who will show 30 live National League TV matches during the current 2022/23 season, including the end of season National League Play-Offs and National League Promotion Final.

Reynolds argues that the National League’s broadcast restriction is depriving clubs of the chance to expand their fanbase.

Title sponsor Vanarama have weighed into the debate, acknowledging Reynolds’ tweets saying it “wants to work with him on this cause. Vanarama is in favour of wider live streaming as long as doing so benefits ALL clubs in the league and their fans.”

“Vanarama, too, want what is best for the fans and pledge to work with him to bring the National League to new levels with more matches streamed, as long as it is what both the clubs and the fans want. We’re in talks with all clubs to assess whether the broadcasting would be of benefit.”