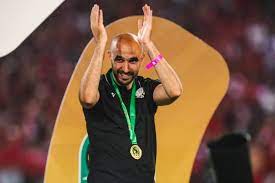 September 1 – Former Moroccan international Walid Regragui has been appointed head coach of the national side just three months before the World Cup.

The 46-year-old takes over from Franco-Bosnian Vahid Halilhodzic, who was dismissed on August 11 because of “differences of opinion” over preparations for the tournament as well as sidelining two star players, Chelsea’s Hakim Ziyech and Noussair Mazraoui of Bayern Munich, over disciplinary issues.

His dismissal came despite the fact that he had led the side to the quarter-finals of this year’s Africa Cup of Nations in Cameroon and then secured World Cup qualification in March.

“We are all behind (Regragui) in his new mission at the head of the national team, and we wish him good luck,” Moroccan Football Federation (FRMF) president Fouzi Lekjaa told journalists in Rabat.

“We want to do great things … and we’ll give our all to make you happy.”

French-born Regragui played as a defender for Toulouse, Ajaccio, Dijon and Grenoble as well as chalking up 45 caps with Morocco’s national team. As a coach Regragui won the African Champions League title with Wydad Casablanca in May.

Regragui will be seeking to repeat Morocco’s success of 1986, when they became the first African team in history to reach the round of 16.

Somewhat embarrassingly, the Confederation of African Football appeared to steal the Moroccan FA’s thunder after reportedly revealing that Regragui would be the new coach before the official press conference to make the announcement.