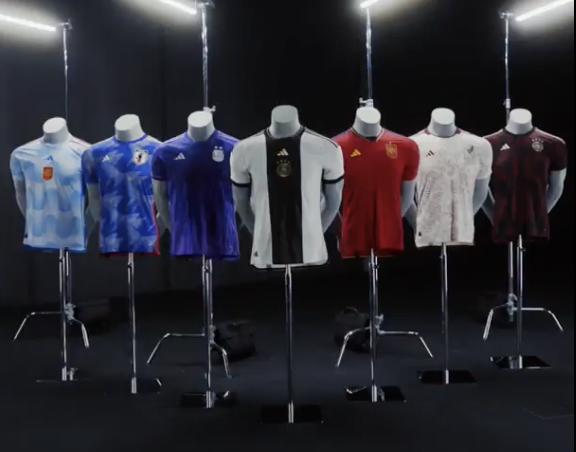 September 2 – Adidas has unveiled the kits for the five national teams it sponsors – Argentina, Germany, Japan, Mexico and Spain – that will be worn at the World Cup later this year in Qatar.

The kits (home and away) will make their debuts with both men’s and women’s teams in the upcoming international match windows.

Fans can buy the kits exclusively on the adidas website or in adidas retail stores.

All the kits are made using 100% recycled polyester and contain 50% Parley Ocean Plastic – collected from remote islands, beaches, coastal communities, and shorelines preventing it from polluting oceans.

Adidas said that “a consistent design approach has been taken across the kits that showcases both creativity and iconic simplicity, enabling players to be the best versions of themselves on the pitch”.

Each design features “cultural touchpoints” ranging from the ancient civilisations and Mixtec art of Mexico celebrated in the nation’s away jersey to the origami crow in Japan’s home kit.

“When we design national team kits for tournaments as big as the FIFA World Cup, we always keep in mind that these designs will become a part of legendary footballing history. For us it’s crucial first and foremost to create kits that equip the world’s greatest footballing athletes with performance-led apparel that helps them unlock their highest level of play, while at the same time always featuring unique and unforgettably iconic designs that are bold, eye-catching and create a true sense of excitement amongst fans all across the globe,” said Jürgen Rank, Senior Design Director Football at adidas.