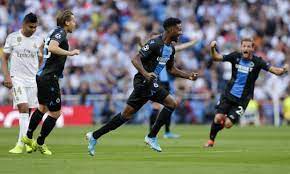 By Samindra Kunti in Brugge

It was 19-year-old defender Abakar Sylla, a €200,000 arrival from Société Omnisports de l’Armée in Ivory Coast, who scored the winner in the 42nd minute with a header at the near post from a set piece in a man-of-the-match performance. Goalkeeper Lukáš Hradecký fumbled his save and fell with the ball into the net.

Sylla was one of seven players in the Brugge line-up to debut in the Champions League, just like club coach Carl Hoefkens.

In his own playing days, Hoefkens encountered Leverkusen in the 1997-98 edition of the Champions League with Lierse. Brugge’s victory, achieved with grit and determination but little quality, was the first time the Belgian outfit kicked off Europe’s premier club competition with a victory. In the local media, Club Brugge general manager Vincent Mannaert, under investigation in the Proper Handen case, said that Brugge’s ambition to finish second in last year’s group stage had been overly ambitious.

They have reaped the financial rewards of the Champions League season after season and sold Charles De Ketelaere for 35 million euros to AC Milan this summer after prolonged negotiations and a first offer of 27 million euros. In recent years, the club has spent €15 million on a state-of-the-art training complex and 10 million euros on upgrading their dated Jan Breydelstadion. They also took over Roeselare’s Schiervelde Stadion for Brugge NXT, the club’s reserve team.

This is Brugge’s sixth Champions League campaign in seven years, but they have never reached the second round of the competition. The three points against Leverkusen, who endured a terrible start to their domestic season with just three points from five matches, will serve as a good launchpad for the Belgians to be competitive in a group that is set to be dominated by Diego Simeone’s Atletico Madrid.

The Spanish club secured all three points with a 2-1 victory as Madrid and Porto scored all three injury-time goals in a dramatic, grandstand finale. Elsewhere, Napoli defeated Liverpool 4-1 to leave Jurgen Klopp’s team with everything to do next week as they face Ajax Amsterdam, who waltzed past Rangers 4-0 at home. In Group C, Bayern Munich registered a routine 2-0 win away to Inter Milan after Leroy Sané’s 25th-minute strike and Danilo D’Ambrosio’s second-half own-goal.