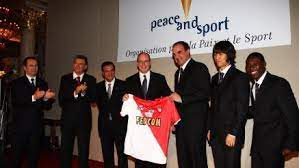 September 8 – AS Monaco are partnering with charity Peace and Sport whose logo will appear on the back of the club’s first team’s shirts in European Cup matches.

In addition to displaying the logo, Monaco will conduct various awareness-raising activities at the club’s Academy with young Monegasque players, as well as take part in some of Peace and Sport’s operations, such as its annual International Forum, and getting involved in the organisation’s field programs.

Peace and Sport is an independent organisation based in the Principality of Monaco and founded in 2007 with the mission to take concrete action to demonstrate the unifying, educational and social impact of sport through sports diplomacy initiatives and field programmes.

Joël Bouzou, Peace and Sport President and founder, said: “Through this partnership, AS Monaco confirms its commitment to using sport as a tool for sustainable peace alongside us. By wearing this jersey with the Peace and Sport logo, the players will become agents of change and promote the unifying values of sport from the neutrality of thePrincipality of Monaco. Like AS Monaco, we are convinced that football acts as a universal language that has the capacity to transcend barriers and bring communities together.”