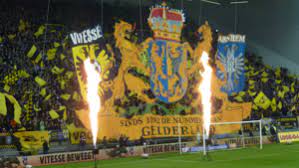 Oyf waived the €155 million debt the club owed him when he exited after a 12-year spell in east Holland during which Vitesse won the Dutch Cup in 2017, the club’s only trophy to date.

Following prolonged negotiations with Common Group, the American investors completed the acquisition of the Arnhem club yesterday (Thursday) with the promise of making Vitesse competitive in European club football. No figure was given for the sale.

“It is an important day for Vitesse and everyone who cares about the club,” said Vitesse general manager Pascal van Wijk.

“For months we have worked hard behind the scenes to bring the acquisition process to the best possible conclusion. We are convinced that the Common Group is the right party for Vitesse and therefore present the new major shareholder with enthusiasm, pride and confidence. We do this after many pleasant conversations, several fruitful meetings in Arnhem and the mutual exchange of a large amount of information.”

Coley Parry heads the New York-based Common Group, which has interests in the health sector, startups and sports. They own Belgian third-division club Patro Eisden and have shares in League Two side Leyton Orient.

Parry said: “We know that the start of the season has not gone as expected, but we believe that the turnaround has begun with the match against FC Groningen. We will get through this period together, aim for the highest achievable in the early season and in the meantime continue to build the foundation for the future.”

“During the entire process and the negotiation talks, two basic principles were central: guaranteeing continuity and keeping the sporting ambitions intact,” added board member Henk Parren.

The takeover is still subject to approval from the Dutch FA, the KNVB.