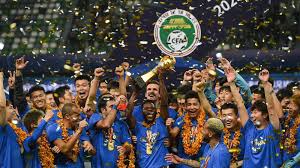 September 12 – The Chinese Super League (CSL) has again been disrupted by of the country’s strict zero-covid policy, weeks after the league had returned to normalcy.

Top-of-the table clash Wuhan Three Towns vs Shandong Taishan was one of the fixtures that were postponed because of the coronavirus. The match was one of 15 matches to be delayed in the last week.

In China, restrictions can see entire cities shut down in a matter of hours as authorities order a lockdown when the number of cases rise.

At the start of the new CSL season, matches were played in hubs to minimise the risk of Covid-19 contraction, but in July clubs were allowed to stage matches at their home grounds again, which signalled the return of the home-and-away format. However, the latest string of postponements has led to speculation that the league will return to playing matches in centralised venues.

China withdrew from hosting the 2023 Asian Cup because of its zero-Covid policy and the domestic game has been in turmoil ever since the global health crisis began with several clubs folding due to new economic realities.

Last year, Jiangsu FC closed months after they had been crowned the 2020 Chinese Super League champions. Chongqing Liangjiang Athletic pulled out of the CSL and ceased operations because of rising debts in May.

The CSL is one of a few leagues that will play through the World Cup in November and December after the league was halted in the summer to facilitate China’s national team’s involvement in the East Asian Championship in Japan.