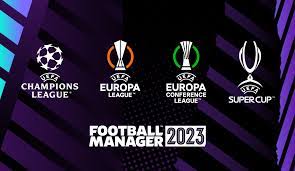 September 12 – Football Manager, the cult football management simulation video game, will include UEFA’s club competitions for the first time in the 2023 edition.

Developed by British company Sports Interactive, the game is published by SEGA. It will also be the first time the game will be available on PlayStation 5.

Football Manager began its life in 1992 as Championship Manager before being renamed and the title acquired by SEGA in 2006. The 2022 edition of the game has sold over 1 million copies.

Miles Jacobson, Sports Interactive’s studio director, said: “Football Manager 2023 marks another significant step forward for the Football Manager series as we introduce the UEFA Club Competitions and bring the game to PlayStation 5. Adding these historic competitions is an ideal fit for all parties involved and will add another dynamic and challenging element for fans that makes this year’s edition the most realistic football management simulation available.”

The UEFA Women’s Champions League, is included in the licensing agreement but will not be included in the current version set for release but in a future version of the game.

No value or term was given for the deal but buyers of the game will with this edition not be purchasing a disc but a instead receive a unique code that, once redeemed, enables play via a choice of digital platforms.