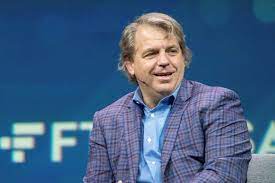 September 14 – Chelsea chairman and part owner Todd Boehly has said he wants to build a multiple-club network to complement the acquisition of the London club. The American has also suggested an MLB-styled all-star game in England to raise funds to be distributed across the English football pyramid.

Speaking on Tuesday at the Salt conference in New York, a bullish, shoulder-shrugging Boehly spoke of his vision for the club and the game. Asked about the scepticism around him, Boehly said: “We are going to be continuously adding resources and we have been talked about having a multi-club level. I would love to continue to build out the footprint and there are different countries where there are advantages to having a club.”

“Red Bull does a really good job. They have got Leipzig and Salzburg, both of which are playing in the Champions League. So, they have figured out how to make that work. You have Man City who have a very big network of clubs.

‘The challenge that Chelsea has right now is that when you have 18, 19 and 20-year-old superstars you can loan them out to other clubs, but you put their development in someone else’s hands,” he continued.

“Our goal is to make sure that we can show pathways for our young superstars to get on to the Chelsea pitch while getting them real game time. For me, the way to do that is through another club in another really competitive league in Europe.”

Boehly’s words suggest he wants to explore multiple-club ownership in the future with an eye to developing players within his own club constellation.

Boehly, who succeeds Russian oligarch Roman Abramovich at Stamford Bridge, also proposed an American-inspired model to raise funds for the lower level of the game, who have long complained that the distribution model doesn’t reflect the riches of the Premier League.

A co-owner of the LA Dodgers, he pitched a north versus south all-star game, borrowing from baseball.

“Ultimately, I hope that the Premier League takes a little bit of a lesson from American sports and really starts to figure out why wouldn’t we do a tournament with the bottom four teams, why isn’t there an all-star game?” asked Boehly.  “People are talking about more money for the pyramid – MLB [Major League Baseball] did their All-Star Game in L.A. this year, we made $200 million from a Monday and a Tuesday. You could do a north versus south all-star game for the Premier League to fund whatever the pyramid needed very easily.”

He also explained his first major decision at the club – to dismiss German coach Thomas Tuchel – as a part of his holistic vision of the club that needs to be “well-oiled”.

“We know people, we know human capital and we understand game plans and strategies, and, yes, we are not expected to be the experts to find the best talents – we are going to put those people in place.

“It’s no different from running any human capital business where it’s all about getting the right resources, making them collaborate, getting them organised, thinking about how you have a global business at a local level.”