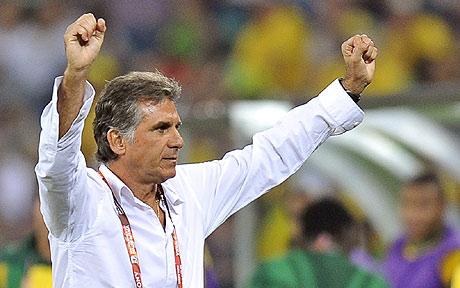 September 15 – Veteran coach Carlos Queiroz has arrived in Iran ahead of his third spell in charge of Team Melli. The Portuguese succeeds Dragan Skocic, who had qualified Iran for the World Cup.

“When the family call you home, all you do is simply just show up,” wrote Queiroz on social media. “Fully committed to your duties and ready for the mission. Let’s do it together lads! To the future! Thank you so much, Team Melli.”

It’s the third time that Queiroz will lead Iran at the global finals after being in charge in 2014 and 2018.

In Brazil, Iran finished bottom of Group F, garnering a single point from a draw with Bosnia and Herzegovina but four years later Team Melli almost reached the knockout phase after defeating Morocco 1-0 in the opening game and drawing 1-1 with Portugal. It was Iran’s best-ever result in the tournament.

With little time to prepare, it will be nothing short of a miracle if the Iranians repeat their success of Russia in Group B in Qatar.

They kick off their campaign against England on November 21 before playing Wales and the United States, the latter fixture a repeat of a group match at the 1998 World Cup in France.

Queiroz will succeed Dragan Skocic, who was fired and then rehired in July in a sign of the turbulence at the IRIFF. Mehdi Taj was elected as the new president of the Iranian Football Federation (IRIFF) for a four-year term. He ran on a ticket promising to bring back Queiroz to the national team and delivered within days.

In September, the Iranians have lined up a friendly with Uruguay in Vienna, Austria.