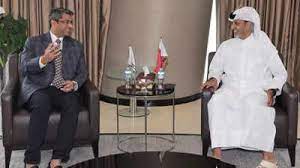 September 15 – The All India Football Federation (AIFF) will enter a Memorandum of Understanding (MoU) with the Qatar Football Association (QFA) following a meeting between the leadership of both governing bodies.

Newly elected AIFF president Kalyan Chaubey and secretary general Shaji Prabhakaran had travelled to Doha on the occasion of the Lusail Super Cup, a test event to run operations at the venue for the World Cup final, and met FIFA president Gianni Infantino to hold constructive talks to discuss the future of Indian football and how FIFA can support the AIFF.

In the Qatari capital, the AIFF also strengthened ties with their hosts as the Indians agreed an MoU with the QFA “for the mutual benefit of football in both India and Qatar”. This followed a meeting between the AIFF and QFA President Sheikh Hamad Bin Khalifa Bin Ahmed Al-Thani.

“I would like to express my sincere thanks and gratitude to the QFA President for his valuable time to discuss collaboration possibilities between India and Qatar. I am sure this would be beneficial to both countries in the long run,” said AIFF president Kalyan Chaubey in a statement.

The new bonds mark progress for the AIFF after FIFA had suspended the federation over third-party interference in accordance with article 14 of the FIFA statutes and stripped India of the hosting rights of the U-17 Women’s World Cup.

Following the Supreme Court’s intervention, administrative powers were handed back to AIFF, and India were reinstated as World Cup hosts. Presidential elections were then held in Dwarka. But the undertones of political interference in those elections were never far away with Chaubey being a member of the BJP, the ruling party in India.

FIFA president Infantino is expected to visit India during the U-17 World Cup in October.