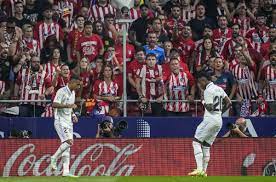 September 20 – La Liga has condemned “hate speech” against Real Madrid star Vinicius and promised that it will work with authorities after further racist abuse of Real Madrid’s Vinicius Junior at the weekend.

“We denounce all incidents inside and outside stadiums,” said a La Liga spokesperson. “We work with clubs to keep our football friendly and enjoyable.”

“Hate speech has no place in La Liga and we always work with the clubs and the authorities to identify and bring to justice any such case.”

On Sunday, Real Madrid won the city derby against Atletico and Vinicius and his Brazilian team-mate Rodrygo danced to celebrate Madrid’s opening goal, but some fans sang racist songs when entering the ground, videos of which went viral on social media. Vinicius’ celebration after scoring, in which he dances, was targeted by comments from pundits in Spain recently.

Agent Pedro Bravo said during a Spanish television discussion on Vinicius that “in Spain, you have to respect rivals and stop playing the monkey”.

His comments led to accusations of racism and even though he has since apologised both Real Madrid and the CBF came out with strong statements. Real Madrid said the “club has directed its legal services to take legal action against anyone who makes racist remarks towards our players.”

In a statement Vinicius said: “Weeks ago, some people started to criticise my dancing. But the dancing is not mine alone,” he said.

“They say that happiness bothers. The happiness of a Black Brazilian being successful in Europe bothers much more. But my will to win, my smile and the sparkle in my eyes are much bigger than that.”