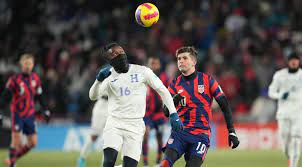 September 21 – Honduras defender Wisdom Quaye has been banned for 18 months due to a doping violation at a World Cup qualifying game against the United States.

Quaye tested positive for clostebol after Honduras lost 3-0 to the US in February, FIFA said. The game was played in severe cold in St. Paul, Minnesota.

FIFA said the 24-year-old Quaye admitted the doping rules violation and made an agreement to serve a ban that applies retroactively and will expire on August 1, 2023.

Quaye, a defender with the Real España club in Honduras, has made three appearances for the national team, which did not qualify for the World Cup in Qatar.

“The sanction followed the player’s admission of the violation and the subsequent conclusion of a case resolution agreement between the player, FIFA and Wada,” FIFA said in a statement.

“The sanction is therefore final and binding.”