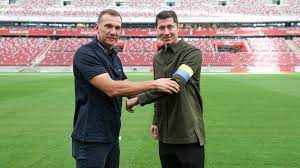 September 22 – Poland captain Robert Lewandowski has pledged to wear Ukrainian colours on his sleeve at the World Cup to show solidarity with the invaded country.

The Barcelona striker met former Ukraine captain and coach Shevchenko at Warsaw’s national stadium to collect a special blue and yellow armband as a gift which he will wear in Qatar.

Ukraine failed to qualify for the World Cup and Lewandowski said: “I’ll wear Shevchenko’s armband at the World Cup in November as a reminder that the people of Ukraine are not alone.”

Lewandowski first showed his opposition to the Russian military invasion of Ukraine within days of it starting in February.  The two-time world player of the year’s public stance helped ensure Poland did not play Russia in a World Cup qualification playoff semi-final scheduled in Warsaw on March 24.

Since then, the football ties between Poland and Ukraine have seen Ukrainian national and club teams play “home” games in international competitions at Polish stadiums this season.

Shevchenko, the former Chelsea and AC Milan striker who played for Ukraine 111 times, has been raising funds to rebuild his country following the invasion. “I want to thank Lewandowski for this act of solidarity and for all his work on behalf of my country,” he said.