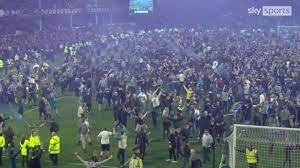 Supporters found guilty of entering the pitch without permission or using smoke bombs and other pyrotechnics will receive the automatic 12-month suspension.

The bans will take effect immediately and apply to both home and away games. They could also be extended to accompanying parents or guardians of children who take part in such activities.

The move comes in response to a rash of dangerous pitch invasions in the Premier League and lower leagues last season.

“Fans caught carrying or activating pyrotechnics or smoke bombs, or entering the pitch without permission, will receive an automatic club ban with a minimum term of one year,” a Premier League statement said.

Tottenham Hotspur’s England international defender Eric Dier told the BBC  this week that he believed the problems of fan behaviour at Premier League grounds was getting worse.

Action was taken in July following a number of high-profile incidents at the end of last season.

Aston Villa keeper Robin Olsen was assaulted at Manchester City on the final day of the Premier League campaign, while a Nottingham Forest fan was jailed for headbutting Sheffield United captain Billy Sharp at the end of their Championship play-off semi-final match last season.