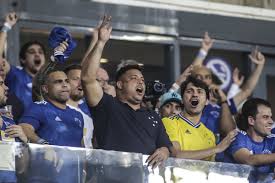 September 23 – After two seasons in the doldrums, Brazilian giants and Ronaldo-owned club Cruzeiro have returned to the domestic top flight following a 3-0 win against Vasco Da Gama.

The Belo Horizonte club guaranteed promotion with seven games to spare in the Brazilian Serie B season. It is a new record speed of qualification.

Ronaldo, a World Cup-winner with Brazil in 2002 and a former great of FC Barcelona and Inter Milan, said: “In a few days we will start thinking about next year. We have to finish this season first and we’re obviously hoping to win the title. But rest assured that Cruzeiro will have a competitive team next year.”

Three points from the Vasco de Gama game left Cruzeiro with an unassailable lead at the top of the Brazilian Serie B, 15 points ahead of Gremio in second and 17 points ahead of Bahia in third.

Once the club of Tostao and a powerhouse in the Brazilian game, Cruzeiro were relegated to the second tier of Brazilian football for the first time in 2019. Last season they finished 14th, just five points above the relegation zone. The Belo Horizonte clubs carry more than €150 million of debt.

In December last year, Ronaldo acquired the Mineiro giants with an investment of $70 million. It was the second time that Ronaldo had entered the ownership arena. In 2018, he bought a 51% stake in the Spanish club Real Valladolid.

Ronaldo is looking to build on new laws in Brazil that allow clubs, membership-owned, to become limited companies. The rules were introduced to try and modernise the Brazilian game with clubs perennially labouring under colossal debts.