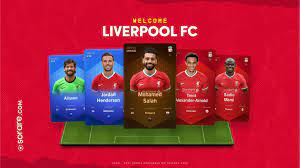 Under the new deal Liverpool and Sorare will collaborate on multimedia fan content and release new experiences for fans and Sorare’s managers.

Liverpool players will continue to be available as digital cards in Sorare’s fantasy game for fans, collectors and players to collect, trade and compete with.

Sorare has users in 185 countries and more than 2 million users worldwide and 280+ partnering sports organisations – including LaLiga, the Bundesliga, and Lega Serie A.

Ben Latty, commercial director at Liverpool, said: “At Liverpool Football Club, we’re always striving to pioneer new technologies for our supporters, with the aim of enhancing their fan experience and making them feel as connected as possible to this Club.

“We’re thrilled to extend our partnership with Sorare and go further in bringing exciting new initiatives to our fans.”