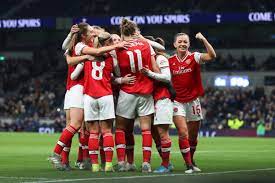 September 25 – The women’s north London derby between Arsenal and Tottenham Hotspur smashed the Women’s Super League (WSL) attendance record at the weekend, the latest indication of how the  game in the UK has surged in popularity following England’s Euro success.

A crowd of 47,367 turned out to watch the hosts win 4-0 – co-incidentally a week before the men’s Premier League fixture between the two sides.

The previous WSL record was 38,262 set at the Tottenham Hotspur Stadium in the 2019 against the same opposition.

The new landmark crowd follows a record-breaking Women’s European Championship campaign that saw over 87,000 pack into Wembley stadium  for England’s victory in the final, setting a Euros attendance record.

“After a stunning summer that saw packed out stadiums to watch the Lionesses during the UEFA Women’s Euro, we were really confident that we’d see a new record attendance early on in this season’s Barclays Women’s Super League,” said Kelly Simmons, The English FA’s director for the Women’s Professional Game.

“The atmosphere at The Emirates was absolutely incredible, and seeing 47,367 fans in the stadium shows just how much the women’s game has grown. I am delighted that we have seen such big interest in the league since the start of the season, which is great credit to the clubs.

“I hope this momentum can continue throughout the whole campaign and I encourage anyone to come along to a Barclays WSL match and be a part of this exciting league.”