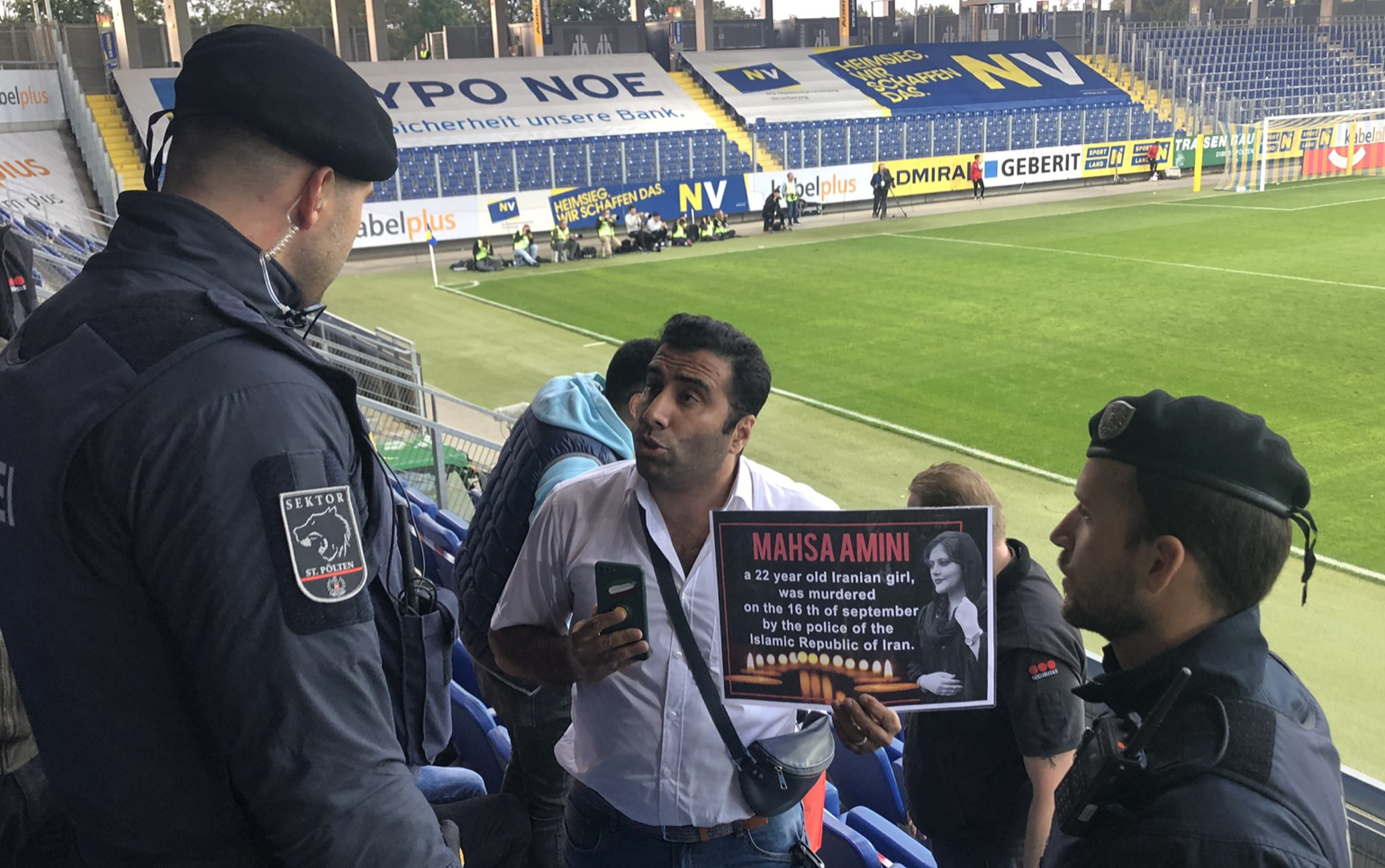 By Samindra Kunti in Sankt Polten

September 29 – With a second-half strike from Mehdi Taremi, Iran defeated Uruguay 1-0 in a friendly international, but the match was overshadowed by an isolated protest against the Iranian regime.

Iran vs Uruguay was always going to have political undertones with nationwide protests raging in Tehran and across cities in the country following the death of 22-year-old Mahsa Amini, a Kurdish Iranian woman who was arrested for breaking Iran’s strict rules on wearing the hijab and died in custody.

The match in Sankt Polten, a rural town east of Vienna, was staged behind closed doors even if both teams brought a sizeable number of officials, VIPs and invitees. Eventually, some fans were allowed in and two protesters sneaked in.

“It’s to give a voice to the people in Iran,” said Farhad, who had come from Vienna. “The police of the Islamic republic is killing the people in Iran. The people from the regime inside the stadium said bad things to me. I am sorry for these persons. Do they want to see a terrorist regime and no humanity?”

A friend of Farhad held a placard in protest, but the pair were ejected from the stadium midway through the first half by the Austrian police, raising questions over the right to freedom of speech and who the police were taking orders from.

In a statement to Insideworldfootball, a spokesman of the Austrian police wrote: “In the first half of the game, a person apparently held up a poster in protest. This person was informed by the organizer and security that the protest in the stadium is not desired. This person left the stadium of their own accord without being forced to do so. The police were only present as a preventive measure. Only the identity of the person was ascertained. She [He] was neither reported to the competent authority nor expelled from the country.”

The police statement however contradicts what happened on the ground. Farhad and his friend did not leave the stadium voluntarily and one protester was almost manhandled as his phone dropped on to the floor.

Before the match, Iran’s FA had banned all Iranian media as well as ESPN, Daily Mail, BBC Persian and Voice of America from covering the match, but following pressure from journalists as well as FIFA all journalists eventually retained their credentials.

Iran did not stage a post-match press conference or a mixed zone, but it did not prevent the players from making a statement in their own way. After the match, they updated their social media accounts with a black avatar. Star striker Sardar Azmoun later posted: “Because of the restrictive laws placed on us in the national team… I can’t take it anymore! I am not worried about being dropped. This will never be erased from our consciousness. Shame on you! You kill easily. Long Live Iranian women!”

For the second time in a matter of days, Azmoun’s post soon became unavailable online. The statement directly defies the Iranian regime and Azmoun risks losing his place in the World Cup squad.

Former players have also spoken up, including legends Ali Karimi and Mehdi Mahdavikia. Under pressure from authorities and with the Revolutionary Guards calling for his arrest, Karimi has reportedly fled the country.

Match organiser SLFC did not respond to Insideworldfootball’s request for comment.