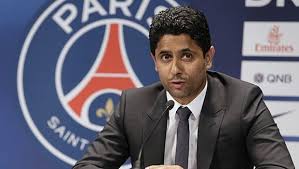 October 2 – Paris St Germain boss Nasser Al-Khelaifi, European football’s most powerful executive, has taken a swipe at Barcelona’s financial policy after the Catalan club signed a string of elite players in the summer despite being heavily in debt.

Barca club made the controversial decision to sell future television rights and a large amount of their digital content in order to splash out an eye-watering €150 million on a host of star players, much to the anger of their rivals.

By selling off 25% of their La Liga media rights and a 49% stake in Barca Studios Barca increased their league-imposed annual spending limit from -€144 million to more than €600 million.

Al-Khelaifi, head of the all-powerful European Clubs Association as well as chairman of influential Qatari broadcaster beIN Media Group, has condemned Barca’s behaviour and says UEFA, where he sits on the executive committee, will examine the legality of their buying strategy.

“If they allow them, others will do the same. UEFA of course have their own [financial] regulations, for sure they are going to look at everything.”

Al-Khelaifi’s latest comments reflect remarks he made a week ago when he indirectly criticised Barca during a speech to European club bosses at the ECA’s general assembly.

“The new financial-sustainability rules are a positive development,” Al-Khelaifi said. “But we need to be careful. Dangerous levels of debt and magical equity deals are not a sustainable path.”