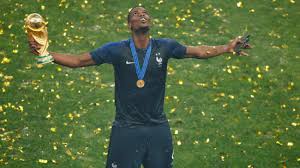 November 1 – Reigning champions France have suffered another blow ahead of the World Cup with the news that midfielder Paul Pogba will miss the tournament after failing to recover from knee surgery.

Pogba, 29, has not played for Juventus this season since rejoining from Manchester United in the summer.

In a statement, Pogba’s agent Rafaela Pimenta said: “Following yesterday’s and today’s medical review in Torino and Pittsburgh, it is extremely painful to inform Paul Pogba will still need recovery time from his surgery.

“For this reason, Paul will not be able to join Juventus’ squad before the World Cup break nor the French national team in Qatar.”

Pogba, whose last appearance for France came in a 5-0 friendly win over South Africa in March, moved back to Juve in the close season after his contract with Manchester United expired.

France have already lost another key midfielder in N’Golo Kante, who was ruled out for four months after having an operation on a hamstring injury this month.

Pogba was one of France’s best players in their 2018 World Cup triumph, scoring in the final against over Croatia as they won the title for the second time.