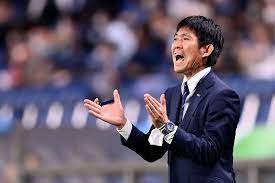 November 1 – Japan will target the last eight of the World Cup, the country’s coach Hajime Moriyasu  (pictured) said as he named his 26-team squad for the tournament in Qatar.

Celtic’s Kyogo Furuhashi and Union Berlin midfielder Genki Haraguchi were among the big names left out of the final squad.

“Selecting members with the experience was one option but ultimately we decided to bet on the players who didn’t have that but had the burning ambition to succeed at the World Cup,” explained Moriyasu at a news conference in Tokyo.

Arsenal’s Takehiro Tomiyasu, Schalke 04’s Maya Yoshida and Monaco’s Takumi Minamino are some of the marquee names in the final list. Japan is the first country to name their final list.

“Our goal is to at least reach the quarter-finals. It won’t be easy.”

It’s the seventh consecutive time that Japan will feature in the World Cup, but they have never reached the quarter-finals of the competition. The Japanese have been drawn in Group E alongside Spain, Germany and Costa Rica, suggesting it will be a mammoth task to get out of the group.

At the last World Cup, Belgium broke Japanese hearts in dramatic fashion in the round of 16. In Rostov-on-Don, the Belgians came from two goals down to score a 94th-minute winner and send Japan home. The Asian team had progressed as runners-up from a group with Colombia, Senegal and Poland.