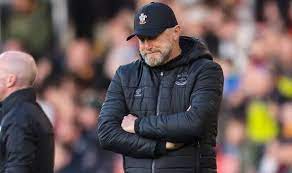 November 7 – Premier League Southampton have sacked their manager Ralph Hasenhüttl after a poor run of results that saw them lose 4-1 at home to Newcastle yesterday.

Hasenhüttl tenure at Southampton has been a mixture of highs but characterised by some very deep lows. He presided over two Premier League record 9-0 losses to Leicester and Manchester United but also take the club to the top of the Premier League for the first time ever when they led on goal difference after eight games in 2021.

Saints are currently in the relegation zone with 12 points after 14 games. They have only won once in their last nine games, against Bournemouth on October 19.

“Hasenhüttl, who was appointed in December 2018, departs having made a significant contribution to the club, overseeing some memorable results and also playing a key role in the development of our club infrastructure, identity and playing squad,” said a club statement.

“However, we now believe it is an appropriate time to make a change.”

Hasenhüttl throughout his tenure at times looked as though he was unsure of what his best team was. At the start of the season he reportedly lost senior players in the dressing room and ended up selling the bulk of them, many of them seasoned and capable Premier League performers. In their place have come a number of young and untested players who have so far failed to make a winning impression.

First team coach Ruben Selles will take charge for Wednesday’s Carabao Cup third round home game against League One side Sheffield Wednesday. At the weekend Saints are away to Liverpool in their final game before the break for the World Cup.