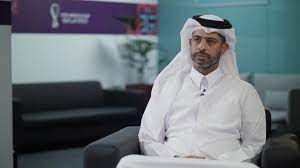 November 9 – In the latest rebuttal of the constant criticism faced by host nation Qatar, World Cup CEO Nasser Al Khater (pictured) has claimed that Europeans think they hold a monopoly on the tournament.

With the endless back-and-forth in the ‘clash of civilisations’ prompted by the Gulf nation’s imminent staging of football’s biggest event, it was Al Khater’s turn to speak out.

In an interview with Al Jazeera less than two weeks before the World Cup kicks off, he said: “European countries feel they have a monopoly over the World Cup. Europe has hosted 11 tournaments out of 22 tournaments, of course, it refuses that a country like Qatar or an Arab Muslim country hosts a tournament like the World Cup.”

His remarks come as Qatari officials have increasingly rolled out the argument that there is a targeted media campaign against the country as the Middle East prepares to organise the World Cup for the first time.

Al Khater noted: “We can say that they are highly racist given that a country like Qatar, an Arab Islamic country, a small country, was able to compete with large countries that consider that they are more deserving of hosting this tournament.”

In 2010, Qatar were awarded the World Cup, defeating the United States in the final voting round 14-8, but the Gulf country has been bogged down after a decade-long of criticism over its human rights record, labour laws, treatment of migrant workers and discrimination against the LGBT community.

However, in the months leading up to the global finals, Qatari officials have become more assertive and aggressive in rebutting criticism.

Last week in a letter that only fuelled to further fan the flames of division and distrust, FIFA president Gianni Infantino, who has moved his residence and family to Qatar, backed up local organisers in an infamous letter to the 32 finalists where he asked the federations and their players to focus on football and avoid political statements.