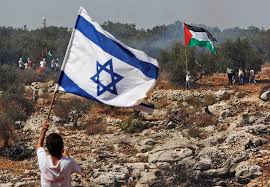 November 11 – Israelis and Palestinians will be allowed to travel together to the World Cup following an agreement brokered by FIFA who met with representatives from the Qatar 2022 organising committee, and from Israel’s Ministry of Foreign Affairs and Ministry of Culture and Sport.

Special charter flights will operate from Tel Aviv’s Ben Gurion airport to take Israeli and Palestinian fans to the biggest sporting even on the planet in November and December. The flights will include supporters who live in the Gaza Strip and the occupied territories.

FIFA president Gianni Infantino, who once suggested Israel and Palestine should stage the World Cup together, said: “We are delighted that an agreement has been reached for Israeli and Palestinian fans to visit Qatar and attend matches during the FIFA World Cup. With this deal, Israelis and Palestinians will be able to fly together and enjoy football together.”

“Football has the power to bring people together, it transcends all boundaries, crosses all borders, and foster unity like nothing else.”

It is a nice platitude but the reality is that in the Palestinian/Israeli conflict football has been stuck at the borders with the Israelis restricting the movement of players and officials, impounding equipment and even preventing international teams from entering Palestine to play fixtures. How easy it is for the Palestinians to get through Israel’s security forces to Tel Aviv’s Ben Gurion airport remains to be seen and will be closely monitored.

Israel and Qatar don’t have diplomatic relations, but travelling Israeli fans will have access to consular services through a private company in Doha. The move indicates a warming of relations between Israel and the Arab countries in the region but it is a fragile accord. Israeli public broadcaster, Kan will also have a temporary studio in Doha during the tournament.

An estimated 8,000 Palestinians and 3,800 Israelis have applied so far for the Hayya Card, which serves as a visa for fans to enter Qatar during the first phase of the World Cup. More Israelis are expected to apply and be processed in the coming days as the opening game between Qatar and Ecuador draws near on November 20.