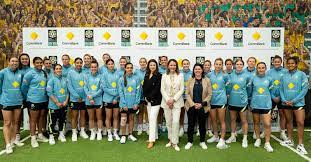 November 14 – Australia’s Commonwealth Bank has signed as a Women’s World Cup 2023 Official Supporter. The tournament will be joint hosted by Australia and New Zealand next summer.

The principal activation of the sponsorship will be the CommBank FIFA Women’s World Cup 2023 Player Escort Programme, which will see 1,500 children aged 6-10 accompany players on to the pitch before matches.

Commonwealth Bank already have a four-year national team naming rights partnership with Football Australia that began in August 2021 and will take the Australian game though the 2023 World Cup.

Sarai Bareman, FIFA Chief Women’s Football Officer, said: “Through their investment in Australian football since 2021, Commonwealth Bank have demonstrated a genuine commitment to growing women’s football participation, creating opportunities, and championing leadership. These goals are closely aligned with the objectives of FIFA’s own women’s football strategy, so this partnership truly is an exceptional fit.”

“Following almost 25 years of investing in women’s sport through our partnerships with Football Australia and Cricket Australia, this partnership reinforces our commitment to supporting Australian football from the grassroots to the elite level.”