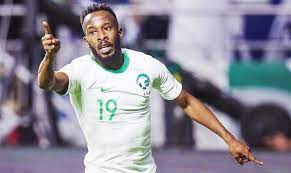 November 14 – Saudi Arabia has been forced to pull one of its leading World Cup players because of an ongoing doping case.

Fahad al-Muwallad (pictured), who has 17 international goals, was ordered to stay at home on Sunday less than 48 hours after being selected.

The Saudis’ coach, Hervé Renard, replaced al-Muwallad from his 26-man squad for the tournament in Qatar “as a precaution”, the team said on its Twitter account.

Al-Muwallad, who plays for Saudi team Al-Shabab, had been included in Renard’s squad despite serving an 18-month ban after testing positive for furosemide, which is on the World Anti-Doping Agency’s banned drug list

Saudi media reports suggested the ban had been shortened which cleared him for selection to play in what would have been his second World Cup.

But the World Anti-Doping Agency confirmed it had intervened in the case.

“WADA has appealed the case to CAS (the Court of Arbitration for Sport) seeking a longer period of ineligibility,” WADA said in a statement.

Following WADA’s intervention, the Saudis were quick to put out a statement but did not say why Al-Mowallad had been allowed to be selected in the first place.

“After reviewing the latest developments in the WADA appeal and following consultations with Saudi lawyers, coach Herve Renard had decided to exclude Al-Muwallad as a precautionary measure,” the statement said.