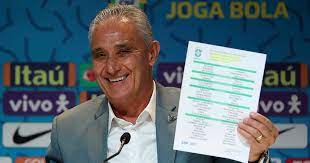 November 15 – The Brazilian Confederation of Football (CBF) has expressed support for Gianni Infantino’s ‘shut-up-and-play’ policy at the World Cup in Qatar.

In a statement, the CBF said: “We agree with FIFA’s request that the main focus of the sports community be on football before and during the next World Cup.”

“We fully agree in the knowledge that, together with FIFA, the Qatari authorities and others, non-football matters are being addressed in the certainty that football can be a force for positive change in societies around the world.”

It added: “For a football without prejudice.”

The statement follows South American regional governing body Conmebol backing Infantino’s controversial request to the 32 World Cup finalists to stick to football during the global finals and not be dragged into political or ideological comments. It’s also testimony to a blossoming relationship between new CBF president Ednaldo Rodrigues and FIFA president Gianni Infantino, who last met in Paris following Brazil’s friendly with Tunisia, their last outing before Qatar.

However, ahead of the Tunisia friendly, Brazil coach Tite does not appear to be towing the company line and has expressed his support for a compensation fund for migrant workers who suffered human rights and labour abuses in the World Cup host nation.

“My education was rooted in my family, my friends and our teachers, and they are present in all of us. So that people have a more just, more egalitarian society, whether they are in Qatar or in any place. For the human side. I will support it, support it… In relation to the fund? As well.”

Earlier this year a coalition of Human Rights groups called on FIFA and Qatar to compensate migrant workers with the #PayUpFIFA campaign, demanding a fund of $440 million, the equivalent of the prize money that will be on offer during the World Cup.

In 2010, Qatar was awarded the World Cup hosting rights but ever since the Gulf nation has been under scrutiny for its human rights and labour law track record.

Much of the abuse revolves around the kafala system, prevalent in Gulf countries. It ties a “foreign” worker to a sponsor, who yields “unchecked powers over migrant workers, allowing them to evade accountability for labour and human rights abuses, and leaves workers beholden to debt and in constant fear of retaliation”, according to Human Rights Watch.

Qatar and local World Cup organizers have always maintained that worker welfare standards have dramatically improved. But there are reportedly still more than 5,000 dead bodies and countless others severely injured on construction sites across the nation.