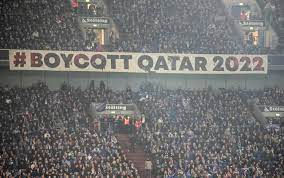 November 15 – Just days before the start of the World Cup, German fans have stepped up their protest against Qatar staging the tournament.

On Sunday, before the last Bundesliga series of games ahead of the league’s extended two-month winter break, Freiburg fans behind one goal held a huge banner with the words, ‘Boycott Qatar’.

Mainz fans also called for a boycott during their team’s fixture at Eintracht Frankfurt, Hertha Berlin supporters displayed sign saying ‘No Herthaner will watch the World Cup in Qatar’ while Werder Bremen fans claimed the number of deaths among migrant workers is higher than the number of playing minutes at the 32-team competition, which they described as “soccer’s biggest crime to date.”

“It was wrong and it’s still wrong,” Bernd Beyer of the ‘Boycott Qatar 2022’ initiative told The Associated Press.

“The fans do not identify with it and are saying they don’t want to have anything to do with it, but they are actively criticising it and not just switching off.”

“The decision is wrong because Qatar is a country where human rights don’t apply, where migrant workers are heavily exploited, where homosexuality is forbidden.”