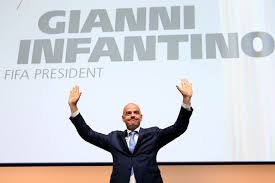 November 18 – With impeccable and perhaps deliberate timing to gain maximum publicity on the eve of the World Cup, FIFA has announced that its president Gianni Infantino is getting four more years at the helm of the organisation.

Infantino was the only name submitted by the Wednesday deadline for nominations, FIFA said, meaning any country who opposes him securing a third term will have to give in to the inevitable.

A brief statement said Infantino would be the only candidate when the election takes place at the 73rd FIFA Congress in Kigali, Rwanda on March 16 next year.

“No other candidature has been submitted,” the statement said.

Infantino’s third term follows in the line of previous FIFA presidents – Joao Havelange was in charge from 1974 to 1998 and Infantino’s predecessor Sepp Blatter held office from 1998 to 2015.

Infantino was elected in 2016 promising to “restore FIFA’s image” after the organisation was plagued by scandal in the final years of the Blatter era.

But his own presidency has been far from smooth with himself still facing criminal proceedings relating to three undocumented meetings with then Swiss attorney general Michael Lauber in 2016 and 2017.

There is also the valid argument to suggest that Infantino, ever the opportunist, owed his entire elevation to the top of the FIFA tree to the fact that his former boss and UEFA president Michel Platini was banned from football along with Blatter for ethics violations.

The German Football Federation (DFB) has already announced it will not support Infantino’s re-election over what it said was his lack of “deeper consideration for human rights and more commitment to humanitarian issues” among Qatar’s migrant workers.

The DFB has been a strong supporter of calls from for FIFA to set up a compensation fund for migrant workers who built the World Cup stadiums.

Infantino would no doubt cite the growth in Fifa’s revenues – and money always talks –  as justification for him carrying on.

But many of his proposals have been harshly criticised in some quarters, not least to hold the World Cup every two years.

Yet having shored up his support base across the majority of FIFA’s confederations, he is now set to stay in the £3 million a year job for another four years – and potentially even beyond that.