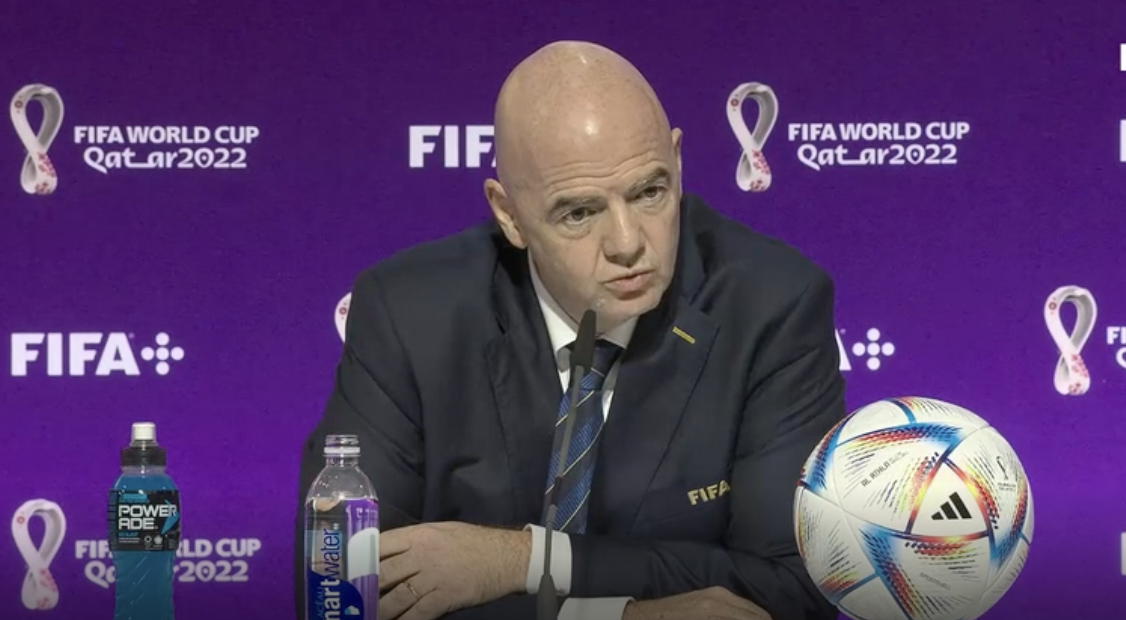 November 21 – Two weeks ago, as organisers put the finishes touches to 12 years of planning, the president of FIFA and his trusted number two – clearly alarmed about their showpiece tournament being undermined by constant criticism over Qatar’s human rights record – took the unprecedented step of pleading with the 32 finalists to concentrate on the football and not to preach morality.

Fast forward to last Saturday on the eve of the big kick-off and Gianni Infantino, with exultant Trump-like bombast, stepped up the rhetoric, using the traditional eve-of-tournament press conference to spew out the most delusional, toxic diatribe in the history of the corruption-chequered organisation.

If Infantino’s 57-minute exercise in self-aggrandisement  as he attacked the west for 3,000 years of exploitation and colonialism was supposed to sweep away all the posturing about Qatar’s treatment of migrant workers and the LBGTQ+ community and focus the mind on football, it backfired spectacularly.

Here was the president of FIFA behaving like a footballing Tsar, accusing the West  of hypocrisy, even throwing in his own experience of being bullied as school to somehow justify his spurious, self-obsessed rant.

Having pleaded with the teams only a fortnight previously not to give lessons in morality, who was the hypocrite now?

As cringe-worthy monologues go, this was right up there, far more outrageous than the worst excesses of his predecessor, Sepp Blatter who, just to remind you, voted for the United States as 2022 hosts.

Astonishingly, Infantino at one point even seemed to suggest that Qatar offered greater hope to refugees than Europe. Yet according to media reports, last year Qatar took just 197 refugees, despite being one of the world’s richest nations.

Amid all the self-delusion and kow-towing to his royal hosts, Infantino conveniently forgot one thing. It is exactly BECAUSE of western pressure, not in spite of it, that workers’ rights reforms, such as they are, have taken place in Qatar.

He also ignored the fact that when he took over at FIFA, he made great play of promising  to sweep away corruption and turn FIFA into  a clean organisation. Perhaps someone should remind him that Qatar being awarded the World Cup, albeit before his time, was intrinsically linked to the very corruption that brought FIFA to its knees.

Not the wisest course of action perhaps, therefore, to spend almost a full hour praising the Gulf state’s supposed merits – notwithstanding the perfectly reasonable argument that the football-mad Middle East, as a region, is perfectly entitled to host.

On one issue, Infantino may have had a point. Well, sort of. The last-minute u-turn cancelling beer sales within  stadiums – clearly as a result of pressure put on FIFA by a Muslim nation spooked by the prospect of strict traditions being ripped up – on paper shouldn’t be too much of big deal.

But dangling the carrot only to whip it away at the last minute smacks of cynicism. Plus, of course, there is now the very real threat of a legal wrangle with Budweiser.

It was, quite simply, one gigantic own goal by the most powerful man in football, exacerbated by his communications chief, former Sky correspondent Bryan Swanson deciding that now was the time, in order to protect his boss’ already damaged reputation in front of hundreds of journalists, to reveal that he himself is gay.

As an exercise in deflecting criticism away from Qatar’ record on human rights, it was all utterly preposterous, let alone unnecessary.

But will Infantino care? Remember those misguided cries of “Four more years” before  Donald Trump, perfectly fairly, was removed from office?

Whether you like it or not, four more years is exactly what Infantino will receive when he is re-elected unopposed next year.

That means he basically has carte blanche to say what he likes when he likes without having to worry about the consequences in terms of his power base.

It partially explains perhaps why he thought he could get away with Saturday’s extraordinary tirade that made headline news, hardly any of it positive, across the world.

It was a massive gamble that may have been an attempt to pull together different cultures in celebration of the game’s greatest showpiece but served only to portray him, not for the first time, as a despotic leader who has lost the plot. Again, which former American figurehead does that remind you of?

Instead of preaching to the masses like some kind of fanatical zealot, if Infantino really wants to show off Qatar in the best possible light, he should leave it to the fans, thousands of whom are pouring into the tiny Gulf state to spread a little happiness.

That’s surely the most effective way of justifying Qatar’s original motto, Expect Amazing, and bridging the gap between east and west.