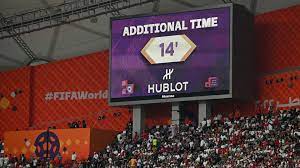 November 22 – New FIFA guidelines resulted in more than an hour of stoppage time in the first four World Cup games in bid to maximise playing time and avoid time-wasting.

No fewer than 27 minutes were added on to England’s 6-2 win against Iran on Monday after Iran goalkeeper Alireza Beiranvand’s head injury but managers, players and fans have been baffled by how much additional time referees are finding.

It now emerges that this was a strategy devised by FIFA referees chief Pierluigi Collina before the competition began.

Collina confirmed that fourth officials had been instructed to keep track of time lost during the tournament in Qatar.

“In Russia, we tried to be more accurate in compensating for time lost during games and that’s why you saw six, seven or even eight minutes added on,” he told reporters at a pre-tournament briefing.

“Think about it: if you have three goals in a half, you’ll probably lose four or five minutes in total to celebrations and the restart.”

Iran’s Mehdi Taremi’s penalty against England came on 102 mins and 30 secs while Davy Klaassen’s goal for the Netherlands against Senegal was timed at 98 minutes 17 seconds.

“So the times of substitutions, penalties, celebrations, medical treatment or of course VAR, will have to be compensated.”

Laudable though Collina’s aim might be, it has resulted in players collapsing with cramp, unable to continue and with no subs left and FIFA unwilling to pause the clock, like in rugby.