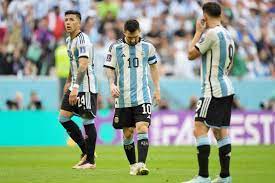 By Samindra Kunti in Lusail

At the gold-clad Lusail Stadium, Lionel Messi ignited the tournament, but not in a fashion he could have ever imagined.

In the first half, Argentina played like Scaloni’s model team, but after the break they disintegrated, resembling the sluggish Albiceleste of Jorge Sampaoli in 2018. In many ways, Saudi Arabia’s win was also a victory for courage. Saudi coach Hervé Renard ran the risk of a high line, which stopped Argentina from building rhythm. At the same time, the Green Falcons recovered possession high up the field and struck.

At first, the strategy seemed suicidal. In the 10th minute, Messi converted a penalty to hand the South American champions the lead, but they were constantly flagged offside playing the ball over the top and had three goals chalked off by an excitable VAR. Argentina failed to capitalise on their chances before the break and were later punished for it by a brave and bold Saudi Arabia.

In the 48th minute, Saleh Al-Shehri produced a marvellous equaliser and his team’s winner was even better. Star player Salem Al Dawsari’s goal was an instant World Cup classic – and more significant than Saeed Al-Owairan’s famous slalom against Belgium at the 1994 World Cup.

Al Dawsari is the team’s talismanic number 10, brave on the ball with a bit of an attitude and a box of tricks. In the stands, the Saudi fans went berserk. They had crossed the land border with Qatar in their thousands, proving that football in Saudi Arabia enjoys massive popularity.

Some of the fans chanted the name of the Saudi crown prince, Mohammad bin Salman. In the royal box, the Emir of Qatar Sheikh Tamim bin Hamad Al Thani was seen waving a Saudi flag and draping it around his shoulders, scenes that would have been impossible two years ago with a Saudi-led blockade against the World Cup host.

And Argentina? Their response to Saudi Arabia’s two goals was weak. The South Americans unravelled and it never felt as if the Green Falcons were in real danger of losing their lead. They ran, tackled, hurried and harried with everything they had and succeeded mostly in preventing Argentina from creating major danger.

The game had 12 minutes of stoppage time after lengthy treatment to Saudi defender Nasser Aldosari who was carried off with a suspected concussion. Even so, Renard, in his customary white shirt, could at long last produce a smile.

His side produced one of the great all-time World Cup upsets that rank alongside Senegal’s defeat of France in 2002 and the USA’s victory over England in 1950.

For Argentina and Messi, who had promised one last great assault on the ultimate prize in football, it will be do-or-die all too soon against Mexico.