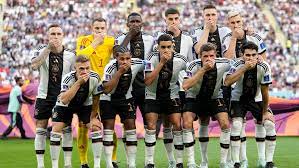 November 24 – In a defiant protest, Germany’s player covered their mouths against FIFA’s clampdown on free speech and the ban of the ‘OneLove’ armband’.

Germany’s starting 11 all posed with their right hands in front of their mouths, sending a clear message to world federation FIFA which banned the OneLove armband that some Europeans wanted to wear during the World Cup in Qatar as an anti-discrimination message.  The campaign was meant to highlight marginalised groups in Qatar, which criminalises homosexual conduct.

“We wanted to use our captain’s armband to take a stand for values that we hold in the Germany national team: diversity and mutual respect,” wrote the DFB on Twitter at the same time. “Together with other nations, we wanted our voice to be heard.”

“It wasn’t about making a political statement – human rights are non-negotiable. That should be taken for granted, but it still isn’t the case. That’s why this message is so important to us.”

At a news conference after the match, Hansi Flick reinforced that message saying that “It was our sign that FIFA cannot silence us,”

Germany’s interior minister Nancy Faeser made her own statement up in the seats reserved for FIFA’s most important guests, by wearing a “One Love”-armband in the presence of FIFA president Gianni Infantino.

FIFA will reportedly not open disciplinary proceedings against the German team.

After FIFA banned the armband, the world federation has brought forward its own ‘No Discrimination’ campaign and said all 32 captains would have the opportunity to wear an armband linked to the campaign.