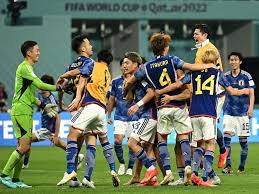 Hansi Flick refused to draw a comparison with 2018 when Germany exited the World Cup at the group stage, saying: “We are really disappointed. We controlled the ball in the second half and did not score, and Japan were efficient. We made mistakes that you can’t make in a World Cup. We must improve. I was not there in 2018, I only look forward to the Spain game. We have the quality needed.”

In Russia, a 1-0 defeat by Mexico in their opener prompted a complete meltdown and dramatic first-round exit, their worst World Cup result in eight decades. With Spain up next, Germany know that they could almost be on the brink again.

He instructed his players to lurk on the counter, resulting in the first half without any attacking ambition. It also seemed counterproductive as Germany took the lead through a penalty conversion by Iker Gundogan, but with a series of second-half substitutions, Moriyasu changed the game.

Substitutes Ritsu Goan and Takuma Asano, who both ply their trade in German football, found the net to shock Germany and hand Japan their first-ever victory against the four-time champions.

Germany were made to pay for their lack of finishing in the first half, but Flick’s team also looked undercooked. Their fitness was inferior to the Japanese, who brought real energy to their game in the second half. Even so, Japan won a World Cup game while having the second-lowest possession figure in history (26.2%).

That stat will not matter to Moriyasu and Japan, who will be in a commanding position going into their encounter with Costa Rica who were thrashed by Spain.

It was the second major upset in the space of two days after Saudi Arabia shocked Argentina and Lionel Messi on Tuesday with another rearguard win.