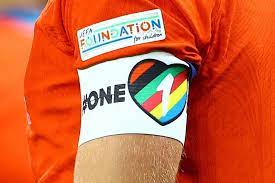 November 25 – The Danish FA (DBU) are playing down reports they are leading a possible withdrawal from FIFA over the ‘OneLove’ armband storm.

Media reports surfaced on Wednesday following a news conference where DBU president Jesper Moeller apparently suggested the country was considering pulling out of FIFA after seven European teams were threatened with sporting sanctions if they wore the armband.

“Some media have made the misunderstanding that DBU will withdraw from FIFA,” DBU head of communications Jakob Hoejer told Reuters, however. “That was not said at the press conference.”

But he made it clear that the controversy was certainly not over.

“We’re critical and not satisfied and we’ll not vote for the present FIFA-president (Gianni Infantino). We will discuss further actions with our Nordic and European colleagues.”

German players held their hands over their mouths to protest being silenced by FIFA ahead of their World Cup opener against Japan on Wednesday.

At the same game, German interior minister Nancy Faeser wore the ‘OneLove’ armband while seated next to Infantino at the game, with the German football association saying in a statement that “denying us the armband is the same as denying us a voice”.

Ahead of the World Cup, the seven countries wrote to FIFA to explain their wish to have their captains wear ‘One Love’ armbands in support of LGBTQIA+ rights.

The governing body failed to get back to the teams until the beginning of the competition, warning any player wearing the armband would be booked, or potentially face harsher sanctions.

Moller was quoted as revealing that Nordic countries had been contemplating leaving FIFA for some time.

“We have been discussing it in the Nordic region since August,” Moller said.  I imagine that there may be challenges if Denmark leaves on its own. But let us see if we cannot have a dialogue on things.

“I have to think about the question of how to restore confidence in FIFA. We must evaluate what has happened, and then we must create a strategy – also with our Nordic colleagues.”

Infantino is set to run unopposed for another FIFA term next year  but Denmark, like the Germans, won’t be supporting him.

“There are 211 countries in FIFA and I understand that the current president has statements of support from 207 countries,” he said. “Denmark is not among those countries. And we’re not going to be either.”