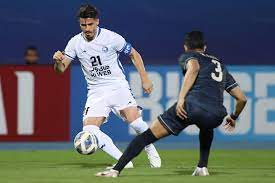 November 25 – Iran’s authorities have arrested a prominent former member of the national team amid a wave of anti-government protests that have swept through the country.

Voria Ghafouri, who was not selected for the World Cup in Qatar but is hugely popular, was detained for “spreading propaganda” and “tarnishing the reputation of the national team.”

Ghafouri has been an outspoken critic of Iranian authorities and has openly expressed support for 22-year-old Mahsa Amini, whose death whilst in custody for an alleged breach of the country’s strict dress code for women sparked the nationwide demonstrations that have resulted in hundreds of deaths and thousands of detentions.

Ghafouri plays for the Khuzestan Foolad team in the southwestern city of Ahvaz. Reports said as soon as he was arrested, club chairman Hamidreza Garshasbi resigned.

His arrest came just ahead of today’s crucial World Cup match between Iran and Wales. At Iran’s opening match, a 6-2 thumping by England, the players refused to sing their national anthem in opposition to their government, raising fears they may be punished once they return home.

But they appeared to cave to pressure as they did sing the anthem before kickoff against Wales despite a chorus of boos from their own supporters in the crowd.