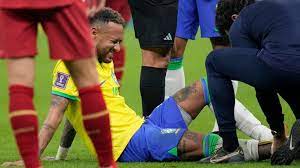 November 25 – Neymar was seen in tears on the Brazil bench after picking up an injury to his right ankle, leaving his World Cup in doubt.

The Brazilians stormed to a 2-0 victory against Serbia, but Neymar’s sprained ankle cast a shadow over their victory. Team doctor Rodrigo Lasmar said that more will be known within the next 48 hours.

“Neymar has an injury on his right ankle, a direct trauma,” said Lasmar. “Due to the impact from the knee of the Serbian player, we started immediate treatment on the bench.

“He continues with the physio, but now need to wait 24 to 48 hours for a better assessment. There is no MRI scan scheduled, but tomorrow we will make a new assessment. We need to wait and cannot make any premature comments.

“He felt this pain throughout the game, but chose to stay on the pitch to help his team for 11 minutes after his injury. It’s remarkable that he did this.”

The Brazil forward was subjected to nine fouls by a physical Serbian side and Anthony replaced him in the 80th minute after spending some time on the ground following a hard tackle by Nikola Milenkov.

Brazil coach Tite sought to reassure everyone that Neymar will still play at this tournament.

“He stayed for the two goals we scored even feeling his ankle injury because the team needed him. In the two chances and the chance he was in, which [was decisive], his ability to overcome pain. In both goals he was already feeling it.

In 2014, on home soil, Neymar exited the tournament with a fractured vertebra after a challenge by Colombia’s Camilo Zuniga at the quarter-final stage.

With 75 goals for the national team, he is two shy of Pelé’s scoring record.