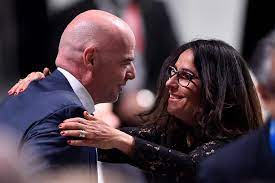 The FIFA universe of misfits are an entertaining bunch.

While hubby Gianni has solemnly declared his temporary gayness, his awful childhood when, as an unfortunate little Italian migrant, he was bullied in bloody Switzerland because of his freckles and red hair (they are both long gone, joined by the sad remnants of decency and humility he hopefully used to have as an Italian child), his Arabic roots (temporary too, except for his wife Lina) and his eloquence in chastising European imperialism (while loving his erstwhile mentor, Donald T). And all that as his very Catholic confession and mea culpa on behalf of the western world made global headlines for its unreal level of cringe. But wait: his lovely spouse put a cherry on it late Thursday night.

Until now, I was unaware of the existence of a Presidential FIFA First Family, of those few superior individuals who openly declare their care for, and co-suffering with gays, migrants and other ‘fringe groups’ around the globe – such as the exploited masses who are presently hosting the FIFA World Cup.

OK, so it’s in Qatar and it’s in 2022. And it’s in winter and all that, but whether you like to be reminded or not, it is the FIFA World Cup. With FIFA rules and regulations. And with FIFA the ultimate arbiter of every move the Qataris can or must not make. It is the quadrennial celebration of cash-as-cash-can to the benefit of an organisation that is now ruled by a particularly despicable top boy. Awful.

Clearly, GI-Joe is a quick study. His many visits with his ultimate soulmates – Trump, Putin & Co – have left a mark. He, too, now wants to be a world leader. Somebody who is cherished by the masses, somebody with weight, relevance and power. Somebody like Kim-Jong Un. Real leaders, Gianni-style. His god-awful presentation at the G20 was yet another jewel in FIFA’s public ladder of excruciating embarrassment (not to mention his horrific speech at the Council of Europe where he so felt the urge to talk about those poor migrant boat-people, and how FIFA would fix it if it got a chance).

But it’s not working.

To be a leader, one needs a few qualities that are sorely lacking in this individual. One needs charisma – his resembles the warmth of razor-wire that surrounds camp-sites. One needs what Erich Fromm calls ‘natural authority’, not the acquired authority that is based on gobbling up cash and re-colonising those who deserve better; so much better than FIFA’s usurpation of their continental sovereignty – both in football and in politics.

Under Infantino, African football has once again collapsed into a sad state of disarray and complete Euro-dependence. Orchestrated by the guy who was elected with their very votes and who, in some particularly weird “gratitude”, took control of CAF, joined at the hip by an atrocious sellout clown whose main claim to fame are her tweets about women’s football results. A leader needs to be an orator whose wit matches the content of the speech. In his case the wit has abandoned ship before ever coming on board, and the content is always a further explosion of, well, cringe.

Neither good old Gianni nor his maladroit predecessor were orators, although they thought they were the best. And that is putting it kindly. They may claim – and their underlings do with pride – that they both speak 83 languages, but what if nobody understands what they are saying in any of them? Freckles – a new word for many and in new in the lexicon of discrimination. And there are many more new words for this ‘stable genius’: try decency, humility, character, empathy. All these are obviously new words, and he doesn’t know them in any of his 83 languages. He doesn’t know them in life. He just doesn’t know any of them.

But let me get to the point.

Late Thursday night, like: very late, a select group of VVIPs received an impromptu invite. In Doha, Qatar, Middle East. You know, where the FIFA World Cup is taking place. Yet the invite was not sent out – late, very late at night – by The Infant, but by his First Lady. Needless to say that it was not she who put pen to paper – in this case fingers to laptop – but her underlings did. I hope. And they sent out this invite – late, very late at night in Doha, Qatar, Middle East – straight from the very first lady to many other first ladies and their entourage:

“I am pleased to send you hereunder an invitation for a brunch tomorrow from Ms Lina infantino, the wife of FIFA President”, and there it went:

Mrs. Lina Infantino, would be delighted to receive you tomorrow from 9.30 at the Chedi hotel – Katara for a brunch.

It is a last minute invitation but everything will be organised in order to permit you to join the 13.00pm match of the day eoetyher from the Fairmont Hotel or directly from The Chedi.

A transport will be reserved for you. thank you for your answer, we apologise for the late invitation and we would love to hear back from you.

I had intended to pick this awful prose apart (allegedly written in English), highlight its motive, its awful verbiage and language, question its timing, its style and content. But then I felt too weak to get into all that.

Instead, I leaned back and reflected a bit, the mild desert winds soothing my mind. I asked myself all the pertinent, if not utterly obvious questions. And I arrived at the only conclusion that is completely obvious:

No matter what you do in life, there is one thing that cannot be bought: class.

Let me leave it at that before my editor cuts my piece to shreds.