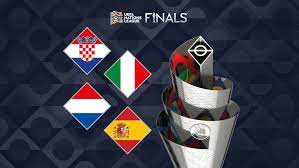 November 29 – The 2023 UEFA Nations League finals will be hosted in the Netherlands and played in Rotterdam and Enschede next summer.

The Netherlands, who qualified for the finals, will be joined by Croatia, Italy and Spain. It is the first time the Dutch have hosted the finals.

The draw for the semi-final pairings will take place in January 2023 in Nyon and UEFA’s HQ.

UEFA said: “The cities of Rotterdam and Enschede have been chosen by the Royal Dutch Football Association (KNVB) to host the matches, with the semi-finals taking place on 14 and 15 June 2023 and the third-place match and final scheduled for 18 June 2023.”

UEFA’s Executive Committee has also award the hosting of the Women’s Futsal Euro 2023 to the Hungarian Football Federation. The matches will take place at the Fönix Arena in Debrecen between 16 and 19 March 2023.

Hungary will be joined by Portugal, Spain and Ukraine in the finals.