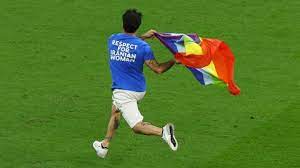 November 29 – A pitch invader with a rainbow flag interrupted the World Cup match between Portugal and Uruguay.

The world broadcast feed tried to avoid showing the pitch invader, but ultimately he could be seen running as well as the referee collecting the rainbow flag that was dropped. The pictures were also broadcast by Bein Sport across the MENA region.

The pitch invader was carrying the flag, a symbol for the LGBT community in the West, but also wearing a t-shit with the word ‘Respect for Iranian Women’ written on the back and ‘Save Ukraine’ on the front.

Qatar’s World Cup has been the most controversial tournament in recent history, not just because of the host nation’s treatment of migrant workers, but also because of discrimination against the LGBT community in the country. A number of European countries wanted to wear the OneLove armband to protest the situation, but FIFA outlawed the armband.

Qataris reacted by wearing armbands in support of Palestine. The German team covered their mouth in protest ahead of their opening game with Japan, after which Qatari at the Spain vs Germany game held drawings of Mesut Ozil, who retired from the Germany national team after he allegedly faced racism.

In a statement, Qatar World Cup organisers addressed the pitch invader saying he “was released shortly after being removed from the pitch. His embassy has been informed…. Hayya Card has been cancelled and he has been banned from attending future matches at this tournament.”