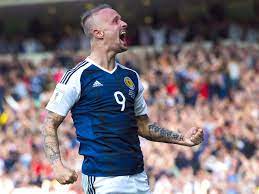 December 2 – Another footballer has been questioned by police investigating gambling in sport.

Former Celtic and Scotland striker Leigh Griffiths was taken from his South Lanarkshire home into Glasgow for questioning by police.

A statement from Police Scotland said: “Following a pre-planned police operation on Thursday, December 1, three men aged 37, 35 and 32 were arrested in the Bothwell, Bonnyrigg and Airdrie areas in connection with an investigation into alleged gambling incidents in sport.

“All three men were released without charge pending further inquiries.”

Griffiths would not talk about the questioning but said he had done nothing wrong.

One of the three men arrested is believed to be 35-year-old Dundee player Paul McGowan.

Griffiths won seven league titles, three Scottish Cups and four League Cups with Celtic. He is currently without a club.